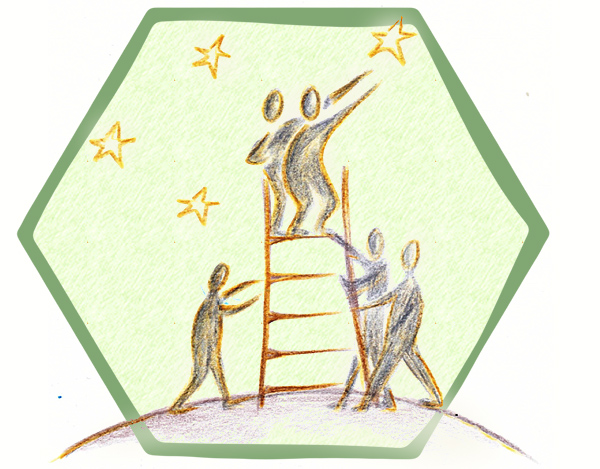 The team works out its focus, so that it can be effective in achieving what it needs, short, mid and long term. Everyone in the team develops an understanding of their context and clarifies their own roles, responsibilities and interfaces.
Who are we? What is our reality? What do we need to do to be successful?

Team Focus is designed to allow a team to position itself in its context and to its stakeholders. The future state (Focus) the team wants to arrive at and achieve is identified and visualized. Alignment is built by getting team members on the same page regarding the team’s history, current state and desired future. In peer coaching, the team members learn about each other by jointly working on their personal business challenges. The roles and responsibilities of the team and its members become defined and reshaped. The team culture and ways of mutual engagement are worked on by clarifying expectations in the team. Potential dysfunctions in the team are addressed in team feedback, practiced one on one. The team maps out its external context, by analyzing its stakeholders and creating a joint focus on how to engage with them. The team’s interfaces are explored: Where are any possible dysfunctions? What do the interfaces need from the team and vice versa? Actions and measures that need to be performed after the Team Focus are defined and assigned in an action plan.